Queenie Holekamp treated her daughters, and sons-in-law by default, to a ten day Southern Caribbean cruise for Christmas. Departing from Ft. Lauderdale, Florida December 16th, the crew was aboard the MS Zuiderdam of the Holland America Line fleet. The official cruise title was "10-Day Southern Caribbean Wayfarer Holiday". Captain of the ship was Bart Vaartjes and the Cruise Director was Andy Levitt.

Day 1, December 16th, was all about getting to the port and passing through Customs, then embarking on an adventure at sea.

After getting on board the ship, we were in port for a while waiting for departure clearance and I had my birthday present, the new Fujifilm XF10 compact camera, so I took images from the balcony of our room of Port Everglades and boats passing in the Atlantic Intracoastal Waterway. 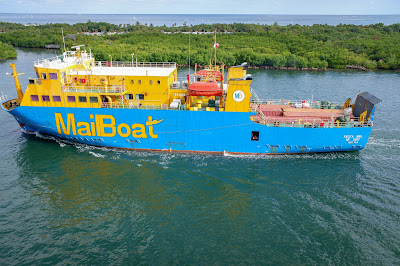 Day 2, December 17th, the ship anchored off the tiny beach island of Half Moon Cay, Bahamas. Half Moon Cay, formerly known as Little San Salvador, is a private retreat owned by Holland America Line and its subsidiary of Carnival Corp. Having been to the little island twice before, the family elected to stay on board. Besides, I forgot to bring my red Speedo, so snorkling was out. Time to wander the ship and take pictures.

Day 3, December 18th found us on Grand Turk island, Turks & Caicos. We had not been to Grand Turk since it and its sister islands were were hit in September 2017 by Hurricanes Irma and Maria. The island is mostly restored, but there are still visible scars. Since those hurricanes, buildings have to be made from concrete.

Day 4, December 19th, Amber Cove in the Dominican Republic. After arriving at the seaport of Amber Cove, we took a bus tour to Puerto Plata to see Central Park and and Puerto Plata Catherdral, as well as do a little shopping.

Day 5, December 20th was a leisurely day at sea as the ship headed south for the ABC islands off the coast of Venezuela. While the family took it east, I was hard at work getting more photos of the ship and crew.

Day 6, December 21st the ship docked at Kralendijk, Bonaire. Bonaire is one of the the ABC Islands (Aruba, Bonaire & Curacao) . Though outside the European Union, the three islands are part of the Kingdom of the Netherlands. Bonaire is colorful and the Dutch influence in the architecture is everywhere, mixed with more modern amenities. If you make it to Bonaire, take one of the glass bottom boat excursions.

Day 7, December 22nd. One of our favorite stops on the cruise, Willemstad, Curacao. The largest of the ABC Islands, it iwas colorful and bright, despite it being the rainy season on the island. The best bus tour of the trip occurred in Willemstad. During the many stop tour, our guide was explaining the above ground cemeteries were necessary because the island is mostly very hard limestone, making it very expensive to dig graves. Naturally I had to take a photo of one of the cemeteries.

Day 8, December 23rd the MS Zuiderdam made out last island stop at the island of Aruba. The ship docked in Oranjestad. Moneywise, Aruba was the best of the trip for shopping. Pedestrians always have the right-of-way crossing streets and there is a lot to see within easy walking distance of the port. Oranjestad's street drainage could stand improving, though the frequent showers were short lived.

Day 9, December 24 was Christmas Eve at sea as the ship headed northerly back to Florida. There was lots going on and I was getting more photos of the crew and the boat. There was an excellent formal dinner followed by entertainment on the main stage.

Day10, December 25th. We celebrated Christmas Day at sea with the staff, crew & passengers on the MS Zuiderdam as we drew closer to the U.S. The final evening of our voyage, the entertainers put on heck of musical show. 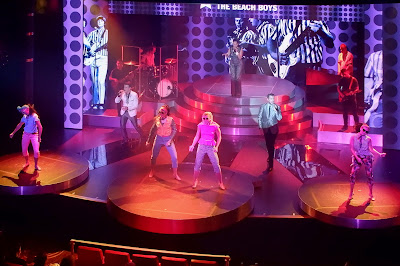 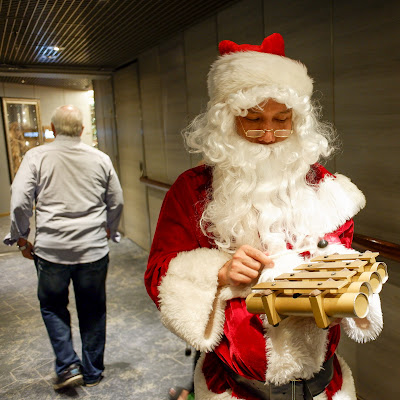 Thank you to the officers, staff & crew of the MS Zuiderdam for a wonderful Christmas excursion.

1. All images copyright wTSandlin 2018, All Rights Reserved. Any copyrighted material, such as artwork, captured in any of my images remain the copyright of the originator/author/artist. No commercial use of these images is authorized without my permission.

2. Officers, staff and all crew members of the MS Zuiderdam or persons appearing in these images of the voyage have my expressed permission to download, copy, print and distribute my images for their for personal use.